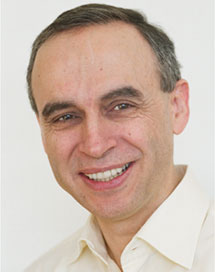 Professor Nikolaus Pfanner from the Institute for Biochemistry and Molecular Biology, University of Freiburg, Germany, will deliver the 2014 Feldberg Prize Lecture on Thursday January 23rd at 4.15pm in the LMB’s Max Perutz Lecture Theatre. The title of the lecture is “The mitochondrial machinery for transport and assembly of proteins.” The lecture is open to anyone locally who is interested in attending.

Nikolaus is currently interested in the biogenesis of mitochondria and the mechanisms of intracellular protein transport and assembly.

Mitochondria are essential for cell viability. They function as powerhouses and play crucial roles in cellular metabolism and signaling. Mitochondria contain more than 1,000 different proteins. Most proteins are synthesized as precursors in the cytosol and are imported by the translocase of the outer mitochondrial membrane (TOM). Biogenesis and function of the TOM complex are regulated by cytosolic protein kinases.

The seminar will discuss the mechanisms of import of mitochondrial proteins and the integration of protein import into a network of machineries that control biogenesis and architecture of mitochondria.

In 1961, Professor Wilhelm Feldberg, CBE, FRS, established the Feldberg Foundation to promote scientific contact between German and English scientists within the sphere of experimental medical research. Each year a German and British scientist, acknowledged according to Feldberg’s wishes as outstanding in their particular field, are awarded the Feldberg Prize. Each recipient gives a prize lecture in each other’s country.