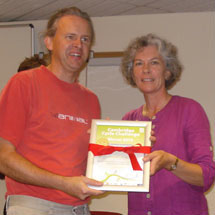 A three-week Cycle Challenge run by Cycle Cambridge has seen the LMB victorious in the “corporate” category for organisations with more than 500 members of staff. The winning teams were those which got the highest percentage of staff to cycle for 10 minutes or more over the challenge period. The LMB registered 19.8% of staff cycling, who between them clocked up 8,858 miles over the three-week period.

The aim of the challenge was to encourage people to take to their bikes and discover the joys and benefits of cycling. Mike Davies, Programme Manager of Cycle Cambridge said: “The Cycle Challenge is a fun way to help achieve our aim to get more people cycling, more safely, more often. It’s been fantastic to see so many Cambridge businesses and organisations supporting the Challenge.”

The Challenge Co-ordinator, Vanessa Kelly, said: “When people get back on a bike and they experience what it’s actually like to cycle, they realise it isn’t hard or scary but it’s actually fun and easy. It’s very encouraging that so many people in Cambridge have been inspired to cycle for the Challenge. I hope that many of the people who got back on their bikes to take part in the Challenge will have been inspired to cycle more in the future.”
The 2010 Cambridge Cycle Challenge saw more than 2,400 people taking part from 99 organisations. It ended with an Awards Ceremony, last Thursday 8th July, at which the LMB received their prize and certificate. The award was collected by Graham Lingley who led the Challenge for the LMB.