Home > LMB News > LMB raises over £1500 for The Movember Foundation 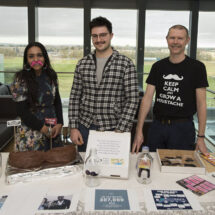 During the month of November, a team of twelve scientists and staff at the LMB came together to raise awareness and money for the men’s health charity, The Movember Foundation. The team grew moustaches, held a prize draw for a giant moustache cake and sold stick-on moustaches which were donned by LMB staff in a finale event on Thursday 30th November.

The team exceeded their £1000 target, and have raised over £1500. The donations will go towards men’s health projects around the world with the aim of preventing premature deaths in men. The Movember Foundation has a particular focus on research into and health services for prostate cancer, testicular cancer and mental health.

Ross Hill, organiser of the LMB’s Movember team said, “The Movember campaign aims to raise both money and awareness to help tackle serious issues surround men’s health. As a medically orientated research institute it seemed only right that we too support such an important cause”