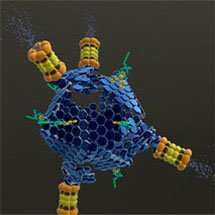 Susanna Bidgood, a researcher in Leo James’ group in the LMB’s PNAC division, helped to explain the inner workings of the human cell system, in a new, popular science programme screened on BBC2 at 8pm on Sunday 22 October.

‘Secret Universe: The Hidden Life of the Cell’ used a range of interviews with experts and dramatic computer animations to explain what happens when a viral infection takes hold and how the body works to combat infection.

The hour-long programme also touched on key areas of research at the LMB, including new discoveries about the evolution of life on earth and about the role of the TRIM21 protein in helping antibody molecules to neutralize viral infectivity within the cell.

The programme is also due to be shown on the Discovery Channel on Sunday 4 November.