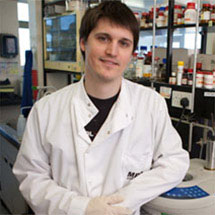 Andrew Holding, from the LMB’s Cell Biology division, has been awarded a British Science Association Media Fellowship – giving him the opportunity to work on Horizon, the BBC’s popular, long-running science programme.

Andrew is one of just 10 scientists, chosen from 180 applicants, to be awarded a British Science Association Media Fellowship in this year’s awards.

Each of the 2012 Media Fellows has been allocated a summer work placement with a high-profile host organisation in the print, online or broadcast media. Placements range from top national newspapers, including the Financial Times and Guardian, through to specialist journals such as Nature and prime time television programmes such as the BBC’s Countryfile.

The British Science Association set up the Fellowships scheme in 1987 to help create a greater awareness and understanding of the workings of the media among practising scientists, engineers, social scientists and clinicians. One of the key goals of the scheme is to address misunderstanding between scientists and journalists and provide vital communication between the two to improve the quality and quantity of stories in the press.
Andrew comments: “I’m thrilled to be awarded a British Science Association Media Fellowship and am looking forward to my placement working on BBC Horizon. Horizon is a treasure of British TV viewing, and it will be a great experience to get behind the camera and see how science gets out of the lab and onto the small screen.”