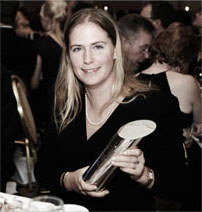 LMB scientist Dr Sarah Teichmann has received a ‘2009 Women of the Future’ award as ‘Science and Technology Woman of the Future’ for her major contribution to scientists’ interpretation of the human genome and an understanding of how evolution shapes the molecules and processes of life.

Human (and other) genome projects are probably one of the most significant advances in biological and medicinal science in the past 20 years. Sarah’s research represents the important next stage. She uses computational (bioinformatics) approaches to analyse the data which come out of those projects to advance our understanding of the molecular processes which govern the way cells act. Each gene encodes a protein and Sarah’s research is aimed at understanding the evolution of protein structures and more importantly understanding the interactions of these proteins – which give the cell its function.

The judges said that Sarah has achieved an astonishing amount in a short time. Her work was described as incredibly important for us all and, as a mentor, Sarah is an inspiration to young scientists everywhere.
Dr Hugh Pelham, LMB Director, congratulated her on her award. “I am delighted that Sarah’s excellent contributions have been recognised in the wider world. She sets an outstanding example for us all.”

After an undergraduate degree at the University of Cambridge, Sarah completed a PhD in Computational Genomics. She spent two years at University College London before returning to Cambridge as a Group Leader at the LMB and Fellow of Trinity College. She became a full programme leader in 2001.

Now in their fourth year, the ‘Women of the Future’ awards were established to identify Britain’s talented young women aged 35 and under, who are set to be leaders of tomorrow. David Cameron and Cherie Blair were present at the awards ceremony in London in November.