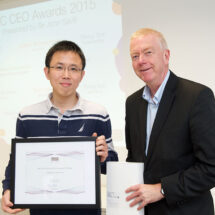 Xiaochen Bai from the LMB’s Structural Studies Division has won the 2015 MRC CEO Team Player Award, with Mark Wing and Jason Fox, both from the LMB’s PNAC Division, being runners up in the Rising Star and Team Player categories, respectively.

The MRC CEO Award Scheme recognises contributions from employees for outstanding effort and commitment to both their work and the MRC.  For the fourth year running, a fantastic number of nominations were received from across the organisation.  This is a great achievement and recognition of the contribution made by staff to the success of the MRC.

Staff were nominated by colleagues, who included comments about why each nominee was deserving of recognition. Comments about the three shortlisted LMB candidates included: 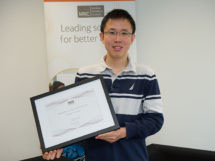 ‘Xiaochen is much more than a team player, he is a multi-team player. The help that he has given is not part of his job, it is completely voluntary and it reflects his generous attitude towards his colleagues and simple desire and willingness to help solving problems.’ 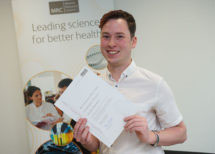 ‘Mark is a competent, professional, hardworking well-liked, respected member of the team.  We are very proud of Mark and he is an excellent ambassador for his profession and the MRC.  He leads by example and his hard work ethic, boundless energy and enthusiasm are infectious.’ 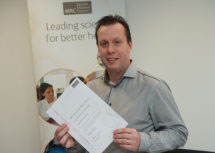 ‘Jason is extremely competent, professional and hardworking. He is a key member of a small team of technicians working in a very demanding room.  He works at a consistently high standard, providing support to the room supervisor and takes on many different responsibilities.’

The Award ceremony took place on 19 November at MRC Head Office in London with all shortlisted candidates meeting MRC Chief Executive, Sir John Savill. Xiaochen won an iPad Air, an additional prize of a paid trip to a scientific or non-scientific work related conference and a certificate. Mark and Jason both won an Amazon Kindle Fire and a letter of commendation.