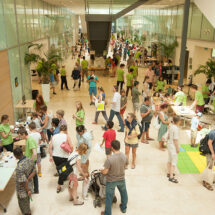 On Saturday 17th June the LMB held a spectacular Open Day as part of the MRC Festival of Medical Research, welcoming over 2000 visitors to the Lab. Over 300 LMB scientists and support staff gave up their time to offer visitors an exciting day of family-friendly hands-on activities, tours of the laboratories and facilities, and talks about the LMB’s ground-breaking research.

The LMB atrium was buzzing with excitement as children took part in an amazing range of interactive activities. The Biological Building Site, where children could build their own DNA models from LEGO™, was incredibly popular: “The Lego activity was brilliant!” There was more to learn about DNA elsewhere – at the Building Blocks of Life activity children dressed up as scientists and mashed bananas and strawberries to extract the DNA, which they could then take home in tiny tubes. “Great! I really liked extracting DNA from the fruit!”, exclaimed one of the children. Charlie Morgan, who co-ordinated the activity, said, “It was delightful and inspiring to watch my LMB colleagues share their enthusiasm and knowledge about the building blocks of life with the next generation of young scientists. Volunteer scientists had a blast encouraging visiting kid scientists and their parents to extract DNA from fruit, solve puzzles using protein translation principles, purify colours from complex mixtures, and measure protein function in saliva.” 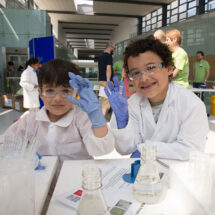 The Neurobiology Division’s ‘open labs’ proved popular, with a range of activities including the LMB’s first Cyber Olympics where visitors could control a robotic arm via a brain-machine interface. Visitors also quizzed scientists about their research on circadian clocks and neurodegenerative disease – “The highlight was talking to scientists who are so passionate about scientific research. Such a well organised event. A fabulous open day giving such an insight into this life saving research.” 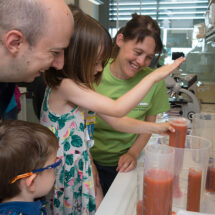 In the PNAC Division, the ‘Worms and Sneezes’ lab, where a giant 10m long model of a parasitic worm hung from the ceiling, was the venue for visitors to learn about the immune response. Children could measure out slime – 1l corresponding to the volume of mucus produced by your lungs each day – and create their own worm balloons. Jillian Barlow and Ana Ferreira, who put together the activities, said, “As a lab our enjoyment came from meeting so many curious and interested people. We were so pleased to be able to share our research into asthma and parasites, and explain to people how our exploration of the immune system can help to develop new treatments.”

Visitors also had the opportunity to visit the £5million Titan Krios cryo-electron microscope as part of the Structural Studies Division tours, that followed proteins through the process of having their structure solved, and found out how this new technique is revolutionising structural studies and drug development. In the Cell Biology Division, visitors could learn about the model organisms, from fruit flies to slime mould, that LMB scientists are using to understand fundamental principles of cell biology. Simon Bullock, organiser of the Cell Biology tours said, “We are funded by the taxpayer and this is a great chance to show the public what we are doing with that money in this building and the important benefits. It’s also a chance for the public to meet scientists and hear their stories.” 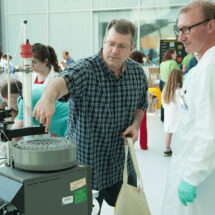 Away from the bench, visitors could explore the hidden side of the LMB building in a tour organised by the Estates and Facilities Department, which covered the building management system, the energy centre and service voids. This eye-opening tour revealed how a modern science lab functions and showed the sheer quantity of infrastructure required to allow our scientists to do their ground-breaking research.

Throughout the day, visitors could attend a series of short talks covering a range of topics from how cells are organised to keep you healthy, to an interactive talk involving diffraction patterns and how this technique has been pivotal to determining biological structures. One visitor commented, “The highlight of the Open Day for me was listening to the talks and having questions answered.”

In addition to this, there was a panel Q&A session entitled ‘…So you want to be a scientist?’ where secondary school and sixth form students could chat to scientists at various stages in their careers to find out what it’s really like to be a researcher. “I loved it, you’ve taught me a lot of things. One thing bad, you’ve given me another job to think about. Now I want to be a scientist too!” smiled one young visitor. 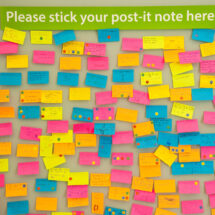 Visitors left comments on colourful post-it notes at the end of the Open Day, including:

“This was an amazing experience, thank you for an insight into LMB!”
“Great event and a wonderful opportunity to engage my children with science.”
“This has been a fantastic opportunity to see and learn about cutting edge science. A brilliant day out. Thank you.”

Summing up the day, LMB Director, Hugh Pelham, said, “I’d like to add my congratulations to all involved in the Open Day. There was a terrific buzz about the place on Saturday. We can all take collective pride in the outcome.”