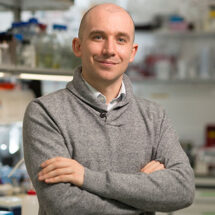 The LMB is delighted to announce the arrival of Emmanuel Derivery to the LMB’s Cell Biology Division, where he will be working on asymmetric cell division. In asymmetric cell division the mother cell divides, distributing its cellular contents unequally between the two daughter cells, thereby allowing them to adopt different cell fates. This is the case for stem cells: after cell division, one daughter cell specialises to perform a specific function whilst the other remains a stem cell with the ability to divide. Failure in this process has been linked to tumour formation and aging.

To better understand the molecular and physical mechanisms underlying asymmetric cell fate determination during cell division, Emmanuel’s group will combine state-of-the-art imaging in the developing fly with in vitro reconstitution using purified proteins. The aim is to elucidate how polarity signals are ‘written’ onto the mother cell’s cytoskeleton, and how these signals are then ‘read’ by molecular motors carrying cell fate determinants, allowing them to segregate asymmetrically into the two daughter cells.

Emmanuel added, “I have a longstanding interest in the cytoskeleton and asymmetric cell division, and our use of cutting-edge, complementary experimental approaches will be bridged by theoretical physics. Ultimately, my plan is to use flies as test tubes to increase our understanding of mammalian systems, potentially allowing restoration of asymmetric divisions in situations where it has been lost. It’s an ambitious goal, but there is no better place than the LMB to address a given biological question at multiple scales: from the atomic structure of molecular machines involved to how they function in the whole animal during development.”

Emmanuel studied Molecular and Cell Biology at the ENS Lyon, France before undertaking a PhD at the Curie Institute and the University Paris-Sud, France. He then moved to the University of Geneva, Switzerland as a Human Frontier Science Program postdoctoral fellow, before joining the LMB.