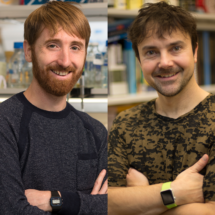 The LMB is delighted to announce the recent arrival of two new group leaders in the LMB’s Structural Studies Division: John Briggs and Julian Gough.

John’s group studies the structures of cellular trafficking vesicles and of enveloped viruses, aiming to uncover the mechanisms that underlie their assembly and disassembly. Cellular vesicles are used to transport cargo between locations in the cell. Vesicle assembly requires a complex series of processes including interaction of protein complexes to drive assembly of the vesicle, collection of cargo and reshaping of the lipid bilayer. The assembly of an enveloped virus is conceptually similar.

In an effort to better understand the dynamic steps of vesicle assembly, John and his group have developed methods for cryo-correlative fluorescence and electron microscopy. This involves differentially fluorescently labelling components of the vesicle assembly machinery which can then be localised within EM images with high precision. In addition, John is making improvements to electron cryo-tomography and image processing. Ultimately, this will provide detailed structural information about the discrete functional steps in the vesicle assembly process.

John added, “our research has benefited greatly from collaborations in the past and there is enormous potential for developing new collaborations within the LMB. Hopefully the methods we are developing for our own research will be useful and beneficial for the research of other LMB scientists.”

Julian’s work involves the development of novel bioinformatics methods and resources, and their application to solving fundamental biological problems. One of the many challenges for biologists is the extraction of meaningful information from large data sets, such as those of genomes and transcriptomes. Julian has been instrumental in designing tools to facilitate this.

Julian’s group is now working on function and phenotype prediction, genetic variation and cell reprogramming. Behind this lies a bioinformatics infrastructure of tools and resources that is also directly relevant to structural studies. For example, data mining can be used to suggest experimental targets, such as identifying receptor proteins for structural investigation due to their link with disease. Going the other way, Julian aims to apply molecular and structural information to the genetic analysis of phenotype.

Julian added, “I am already working with Madan at the LMB to annotate all the chimeric proteins in our D2P2 disorder database, and am looking forward to collaborating with others. I want to benefit from the unique environment at the LMB with its pioneering activities in new techniques and need a world-leading institute such as the LMB that will support me to tackle the difficult long-term research problem of phenotype prediction.”

Julian studied physics and mathematics at the University of Bristol before completing his PhD at the LMB with Cyrus Chothia. He then spent time as a research fellow at Stanford University with Michael Levitt, USA and RIKEN Genomic Sciences Centre, Japan then was a visiting scientist at the Pasteur Institute, Paris before returning to Bristol as Professor of Bioinformatics. He returned to the LMB in January 2017.