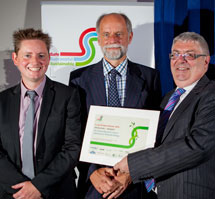 The new LMB building has been announced as joint winner of the 2014 S-Lab award for new research laboratories worldwide.  The award was presented at a gala ceremony in London on September 1st, and was accepted by the LMB Director Hugh Pelham and Steve Holmes who was involved in the construction project.

The S-Lab Awards are organised by the Safe, Successful, Sustainable Laboratories initiative (S-Lab), which aims to highlight lab innovation around the globe, and reveal best practice amongst all the key players involved in lab design, operation and management. They aim to support world-class science.

There were 58 entries for these awards, with the LMB and the Oklahoma Medical Research Foundation Research Tower chosen as the joint winners in the New Building, Research category.  The new LMB building design is a result of many years of collaboration between LMB scientists, RMF/KJ Tait engineers, RMJM architects and BAM construction, shaping the design to meet the needs of the LMB for the next 50 years and beyond.

The LMB building was described by S-Labs as a stunning ‘cathedral of science’ providing world-class facilities to some of the world’s leading biomedical researchers. The 24,000 square metres of research space incorporates many state-of-the-art scientific facilities, and sustainable technologies. At the S-Lab conference on September 3rd Steve gave a presentation to show how the building’s interstitial floors, plant towers and separate energy centre provide a powerful infrastructure to support 21st century science.