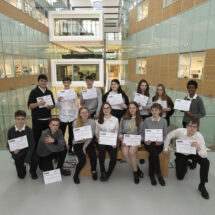 LMB scientists have been working with Year 11 students (aged 15-16) from the neighbouring Cambridge Academy for Science and Technology (Cam-AST) on an eight week Challenge Project: ‘Getting a taste for science’. The project, developed and delivered by LMB scientists and the Public Engagement team, aimed to expand the students’ problem-solving and practical skills as well as scientific knowledge, through a programme of activity based lessons, visits and enquiry based learning – giving the students an insight into what it might be like to be a scientist.

Using chemotaxis – the process whereby animals move towards or away from certain chemicals in their environment – as a starting point, the project first explored how genotype relates to phenotype: wild type nematode worms move towards a particular smell, but worms with a mutation in their gene encoding the receptor for that smell do not. The students saw a demonstration of worm chemotaxis and were able to investigate their own response to smells and how this might relate to which variant of the PTC gene they each have. From there the students investigated the structure of DNA and learned about the central dogma: how DNA is transcribed to produce mRNA, which is then translated to make proteins, the molecular machines of the cell. 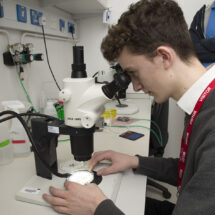 Next the students found out about model organisms and why these are used in scientific research. This was supported by a visit to the LMB where the students learned more about the research conducted here using the key model organisms Dictyostelium, C. elegans and Drosophila. The students also visited the LMB’s animal facility and mechanical workshop – demonstrating the variety of careers available in a research institute. 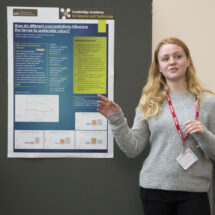 With the support of LMB scientists, the students used their practical skills and scientific thinking to design and conduct their own experiments to investigate smell preference in Drosophila larvae. They then produced scientific-style posters outlining their experiments which they presented at the LMB in a final event similar to a scientific conference poster session. Staff and scientists from across the LMB came to view the posters and ask the students questions about their projects.

Theo, one of the students who participated in the Challenge Project, said the project “opened up new career ideas and broadened my horizons”. 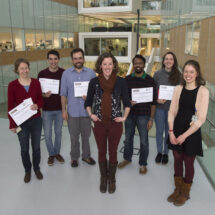 Over twenty LMB scientists participated in the Challenge Project, being involved with everything from designing the programme of activities to delivering lessons and guiding on the tour of the LMB. Helen Foster, PhD student in the LMB’s Structural Studies Division, who helped develop the project and delivered a session about proteins said, “I really enjoyed being involved in the Cam-AST challenge project, I think it gave the students a true taste of what it’s like to be a scientist and also provided a challenge for us to explain how and why we do our work!”

Challenge Projects are a key feature of the curriculum at Cam-AST. Developed in close collaboration with partners in industry, healthcare and academia, Challenge Projects provide a unique opportunity for students to develop greater understanding of science, practical science skills, enhanced career awareness and transferable skills such as teamwork and leadership. The Cam-AST Challenge Project programme is widely regarded as a national exemplar of excellence in project-based learning. Alistair Easterfield, Assistant Head Teacher and Challenge Project Co-ordinator at Cam-AST, said, “Giving our students the opportunity to experience science as well as learning about it is at the heart of all we do at Cambridge Academy for Science and Technology. Having an opportunity to do science alongside world leading scientists really enables the students to understand science and puts their academic learning into context and inspires them in their career choices. Thank you to everyone at the LMB who has helped on or supported the project.”