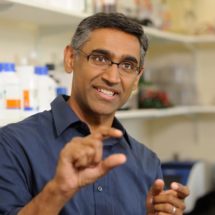 Research in Manu’s lab is focused on membrane protein biosynthesis and quality control pathways that maintain cellular protein homeostasis. Manu discovered a widely conserved pathway for the post-translational targeting and insertion of tail-anchored membrane proteins, and contributed to its mechanistic dissection. More recently, his group has used cryo-EM to gain structural insights into mammalian protein translation, co-translational protein targeting and protein translocation. In parallel, Manu has shown that protein targeting is prone to inefficiency, and that chronic protein mis-targeting can lead to neurodegeneration. This prompted his group to investigate how mis-localised proteins are recognised and degraded, leading to their discovery of new protein quality control pathways.

The Feldberg Foundation was founded in 1961 by Professor Wilhelm Feldberg, CBE, FRS, to promote scientific contact between German and English scientists within the sphere of experimental medical research. Each year a German and British scientist, acknowledged as being outstanding in their particular field, are awarded the Feldberg Prize and give a prize lecture in each other’s country. Previous LMB winners include Sydney Brenner (1983), John Gurdon (1975) and Hugh Huxley (1963).