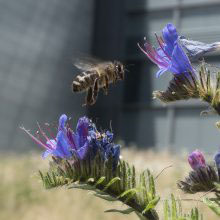 The LMB has recently become home to 16,000 honey bees, representing two nucs (also known as nucleus colonies) which will form the basis of two new hives. The honey bee colony is the brainchild of the LMB’s Environmental Committee, a team of fourteen individuals who spearhead initiatives ranging from encouraging staff to use reusable coffee cups to providing advice about reducing energy consumption. Honey bees are valuable pollinators, and as generalist floral visitors pollinate many species of flowering plants, and it is hoped that the honey bees will add to the LMB’s positive environmental impact.

Led by Geoff Wilkinson, the LMB’s Domestic Services Manager and bee-keeper of twelve years, the hives have been installed on the roof of the LMB’s energy centre, safely away from passers-by, and are being checked each week. It is hoped that the hives will grow in strength and that by the end of the summer each hive will have approximately 70,000 bees. Each hive has a queen bee who lays between 1,000 and 2,000 eggs each day, with the worker bees cleaning the hive, feeding the larvae and collecting pollen. Worker bees travel up to three miles to collect pollen and the LMB is lucky to be surrounded by plenty of green space – if you have a garden in Shelford, Trumpington or Cambridge, your bee visitors could be from the LMB.

It is hoped that in the coming years it may be possible to expand the LMB’s bee colony to include more hives. In the meantime, the plan is to install a camera on the hives which will have a live stream to the intranet so that staff can take a look at the hives at any time.  As well as producing excellent science, the LMB might one day produce excellent honey!