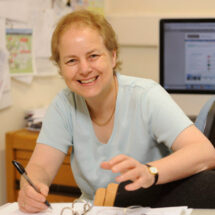 The LMB is delighted to congratulate Megan Davies on being awarded the MBE in the 2015 Queen’s Birthday Honours.

Megan has been the Head of the Medical Research Council Centre, Cambridge since 1996, providing administrative, infrastructure and strategic support and guidance to all the MRC Units in the Cambridge region. In this role, she oversaw a significant increase in research activity, being actively involved in the creation of four new units, and helping the new Directors get started. All the units have been very successful, and together they represent a major contribution to science in Cambridge.

Earlier, Megan had also helped to bring the European Bioinformatics Institute to Cambridge, a major coup that has had a lasting effect on the UK’s strength in this crucial field. She took prime responsibility for the new MRC biological services facilities, and recently has led the complex negotiations and arrangements for the transfer of some MRC Units to the University.

From 1996 to 2011 she was also the Assistant Director, Administration, in the LMB. She supported the work of two LMB Directors, acting as confidant, supporter, trouble-shooter, strategist and instructor, always with the highest level of integrity and commitment. During this time she saw a range of exciting scientific achievements, including two Nobel Prize celebrations and saw first hand the vision for the new LMB building, which opened in 2013.

Megan has made a major contribution to one of the most successful features of Cambridge science – the way in which different organisations, with different funding and roles, work together to create a uniquely supportive environment in which collaboration and synergy is fostered and supported. Far beyond her formal role, she has built relationships with the University, the hospital and other research institutes, such as those funded by CRUK and the BBSRC, and the developers of the Cambridge Biomedical Campus.

Hugh Pelham, LMB Director, says ‘Megan is simply the person to go to when any issue of local integration comes up, and she has done a great deal of unheralded work behind the scenes to foster productive interactions.’

Megan obtained a PhD in Biochemistry at the University of Cambridge before going to New York University Medical School as a Postdoctoral Researcher. She then joined the MRC as a scientific administrator in its Head Office in London, before moving to Cambridge.

She has been awarded the MBE for services to Medical Research.