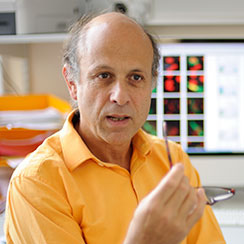 Dr Michael Neuberger, group leader in the LMB’s Protein and Nucleic Acid Chemistry, has been elected as a Foreign Associate of the US National Academy of Sciences.

The National Academy of Sciences was created to provide independent, objective advice to the nation on matters related to science and technology. Scientists are elected by their peers as members and foreign associates in recognition of their distinguished and outstanding contributions to research.

This is a rare honour that very few other LMB scientists have achieved. Among those who have also been elected as Foreign Associates are Richard Henderson, Alan Fersht, and Aaron Klug.

Michael’s research focuses on Immunity and DNA deamination. This research investigates the contribution of targeted deamination of cytosine in DNA by AID/ APOBEC enzymes to antibody gene diversification, viral restriction and genome mutation in cancer.

Michael will appear on the online member directory later this summer.