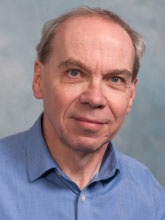 Michel Goedert, Joint Head of the LMB’s Neurobiology Division, has been awarded the European Grand Prix for Research by the Foundation for Research on Alzheimer’s disease based in Paris. Michel has been awarded the Prize for “his major work on the importance of the tau pathway in the genesis of Alzheimer’s disease” and for “the high level of his references and for their citations, as well as for his international reputation in the field”.

Abnormal protein aggregation is at the heart of common human neurodegenerative diseases, including Alzheimer’s disease and Parkinson’s disease. The work of Michel and colleagues has shown that the normally soluble proteins tau and alpha-synuclein form abnormal aggregates inside brain cells in many common neurodegenerative diseases. Michel’s current work is aimed at discovering mechanisms of disease in tauopathies and synucleinopathies, and at identifying disease modifiers.

The European Grand Prix for Research was created in 2011 to promote research in the field of Alzheimer’s disease and related disorders. It provides 90,000 Euros to the host institution and 10,000 Euros to the recipient. The Prize ceremony will take place at the Olympia in Paris on 19th January 2015. Previous recipients of the European Grand Prix are John Hardy, Manuela Neumann and Kaj Blennow.