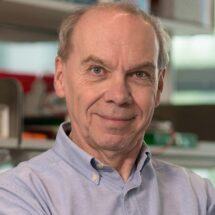 The LMB is delighted to announce that Michel Goedert from the Neurobiology Division has been awarded the Royal Society’s 2019 Royal Medal for Biological Sciences.  Michel has been honoured for his work on neurodegenerative diseases, especially for identifying and characterising key molecules that form the inclusions of Alzheimer’s and Parkinson’s diseases.

Michel’s work has been instrumental in the discovery of the importance of assembled tau protein for Alzheimer’s disease and related dementias. He also identified the protein alpha-synuclein as the major component of the abnormal filamentous inclusions of Parkinson’s disease, dementia with Lewy bodies and multiple system atrophy. More recently, in collaboration with Sjors Scheres, he provided the first structures of amyloid filaments from human brain. The main objective of Michel’s work  is to understand the pathological pathways that lead from monomeric tau and alpha-synuclein to their ordered assembly and neurodegeneration.

“Michel and his co-workers keep making seminal contributions to our understanding of protein filaments that are at the heart of the devastating diseases caused by neurodegeneration, which is quite possibly the most important medical problem today. It gives me immense pleasure to have learned that the Royal Society has awarded the Royal Medal to someone so deserving and so exemplary of LMB’s culture of tackling important long-term problems,” said Jan Löwe, Director of the LMB.

Michel, who is also a Fellow of the Royal Society, said about the award, “I am honoured to receive the Royal Medal and feel humbled when I read the list of previous recipients. My work on neurodegenerative diseases would not have been possible without the support of Aaron Klug, the international culture of the MRC Laboratory of Molecular Biology and the contributions of a number of close collaborators.”

Last year, along with Bart De Strooper, Christian Haass and John Hardy, Michel was awarded the Brain Prize “for groundbreaking research on the genetic and molecular basis of Alzheimer’s disease”. Their work has revolutionised understanding of the changes in the brain that lead to Alzheimer´s disease and related dementias.