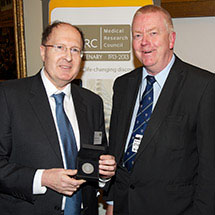 Sir Gregory Winter (Master of Trinity College, University of Cambridge and the former Deputy Director of the LMB) was one of the two outstanding Medical Research Council (MRC) research scientists to be awarded the prestigious MRC Millennium medal. The medals were awarded at a ceremony at the House of Commons on 27 February, which was hosted by Rt Hon Dr Vince Cable MP, Secretary of State for Business, Innovation and Skills.

The Millennium medal honours MRC scientists for outstanding research which has made a major contribution towards the health and wealth of society. Greg’s work in the field of therapeutic antibodies demonstrates the importance of long-term investment in basic science and the crucial role of collaboration with industry in the race to tackle the greatest health problems facing society.

Greg’s work at the LMB from the early 1980s led to the development of techniques to ‘humanise’ mouse monoclonal antibodies and to make fully human antibodies. These solved the problem of patient immune responses against mouse-derived antibody treatments.

His interest in applying the research was cemented when he met the first patient to be given a humanised antibody called Campath-1H in 1989. As Greg says: “It was a turning point. I’d only really been interested in laboratory research and I realised I had to do something with this technology — I couldn’t just walk off back to the lab.”

Since then, Greg Winter has established three spin out companies based on his research: Cambridge Antibody Technology in 1989, Domantis in 2000 and Bicycle Therapeutics in 2009, all of which focus on technologies for antibody or antibody-like drugs.

In 2010 antibody therapies had a global market valued at £25 billion. Today, Greg Winter’s technologies are involved in around 65 per cent of marketed antibody drugs, including Humira® (a human antibody) and Herceptin® (a human antibody). Monoclonal antibodies account for a third of all new treatments including therapeutic products for breast cancer, leukaemia, asthma, arthritis, psoriasis and transplant rejection.