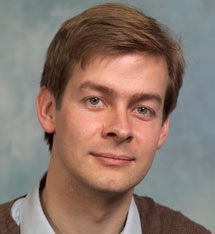 The Biochemical Society exists to advance molecular and cellular biosciences, and with over 6000 members, is the largest discipline-based learned society in the biosciences. The Early Career Research Awards recognise the impact of research carried out by young scientists across the Society’s different Theme Panels.

Paul is a Career Development Fellow, who joined David Komander’s group in 2011. They are studying protein ubiquitination, a key mechanism that regulates many processes within the cell including protein degradation, cell signalling and protein trafficking. Ubiquitin is a small protein that binds to other proteins, in poly-ubiquitin chains, which are used by the cell as regulatory markers. David’s group want to understand how proteins can distinguish between the different forms of ubiquitin chains in the cell, and how different ubiquitin chains regulate cellular processes.

Paul determined the first structures of deubiquitinases bound to substrates, including the structure of the deubiquitinase OTULIN bound to a linear ubiquitin chain. He showed that the ubiquitin chain contributed to its own cleavage, in a mechanism of substrate-assisted catalysis. In more recent work, which will shortly be published in Molecular Cell, Paul revealed how the deubiquitinase OTULIN binds to the E3 ligase LUBAC. This apparently paradoxical interaction is regulated dynamically by phosphorylation of OTULIN.

Paul will receive his prize medal and present an award lecture at a Biochemical Society Conference in 2015.