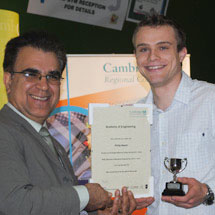 It is awarded to the person who has been the most outstanding student throughout the year on his course. Philip received his award at the Academy of Engineering’s award ceremony held at Cambridge Regional College on Tuesday 14th June 2011.

Philip has been studying for a BTEC National Certificate in Mechanical Engineering at Cambridge Regional College since September 2010, on a day release programme from his work in the LMB. He has been working in the Mechanical Workshop since 2008 and during this time has become a valued member of the team working on such projects as temperature controlled stages and environments for nematode worms, photomultiplier magnetic field systems and electro optics work.

The work carried out in the Mechanical Workshop is vital in the support of MRC scientists and their research. Over the years it has proved an invaluable asset to the LMB and other MRC units in the Cambridge Region.

Philip intends to continue with his studies by completing an HNC in Mechanical Engineering.