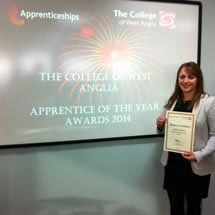 Rebecca Tomkins, from the LMB’s Human Resources (HR) Department, Operations Group has been announced as the 2014 winner of the Apprenticeship Award for Administration from The College of West Anglia. Rebecca received her certificate at the annual Apprentice Awards Ceremony held recently.

The College of West Anglia works with employers across Cambridgeshire to support students through apprenticeships whilst offering individuals the chance to develop knowledge and skills in the workplace.

Rebecca has been part of the LMB HR team since April 2013. She assists in providing a professional and proactive general administrative service and has become a key member of the team. Rebecca is due to complete her Business and Administration Apprenticeship in April 2014.