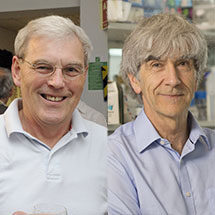 The International Union of Crystallography (IUCr) Gjønnes Medal in Electron Crystallography has been awarded to Richard Henderson, Group Leader in the LMB’s Structural Studies Division, and Nigel Unwin, LMB Emeritus Group Leader from the LMB’s Neurobiology Division, “for their development and powerful application of structural determination methods for biological complexes at near-atomic resolution using electron crystallography”.

The Gjønnes Medal in Electron Crystallography is awarded every 3 years and recognises an outstanding contribution to the field of electron crystallography. The award is named in honour of its first recipient, Professor Jon Gjønnes of the University of Oslo, who received the award in August 2008. Nomination for the Gjønnes Medal is open to scientists and engineers in all areas of electron crystallography, defined in the broadest context as the branch of science that uses electron scattering and imaging to study the structure of matter. Richard and Nigel are the first biological scientists to receive the Gjønnes Medal, with the three previous awards made to researchers in the physical sciences.

Richard and Nigel received their award during the IUCr 2017 Congress in Hyderabad in August, where they shared the presentation of a Keynote Lecture.