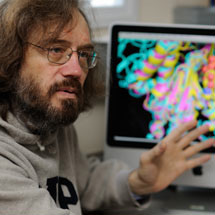 Dr Roger Williams, group leader in LMB’s PNAC Division, has been elected as a Fellow of the Academy of Medical Sciences. The Academy promotes the translation of advances in medical science into benefits for patients and the population at large: fellowship of the Academy is based on exceptional contributions to the medical sciences.

Roger’s research focuses on determining the structure of protein complexes involved in phospholipid signaling and sorting pathways within cells. These pathways are involved in many cellular functions, the immune systems, and are implicated in the growth and survival of cancer cells.

By understanding the structure of the multi-protein complexes that form the components of the signaling pathways, researchers in the Williams’ group aim to discover how the pathways work, how they are regulated, and use this information to design specific inhibitors that can be used in drug development.

Roger started his own research group at LMB in 1992 after completing his PhD in Biochemistry and Mathematics at the University of California, and became an LMB Programme Leader in 2000.
Forty UK medical researchers will be formally admitted to the Academy at a ceremony on Tuesday 22 June bringing the total number of existing Fellows to 983. LMB alumnus, Jean-Paul Vincent, who started his group working on epithelial patterning at LMB in 1993 before moving to MRC National Institute for Medical Research in 1997, will also be admitted.