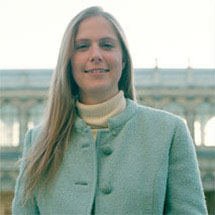 Sarah Teichmann, a Group Leader from the Structural Studies Division at the LMB, will deliver the annual Francis Crick Lecture at the Royal Society on 21 November 2012.

During the lecture, entitled “Finding patterns in genes and proteins: decoding the logic of molecular interactions”, Sarah will look at the high-throughput methods that are now providing a deluge of data about genes and proteins. She will then explain how the computational analysis of this information is helping to reveal fundamental principles of gene and protein interactions.

Sarah was awarded the prestigious lectureship for her groundbreaking work in bioinformatics. At the LMB, her group’s discoveries include important general principles in the evolution and assembly of protein complexes that will improve engineering of protein complexes, and aid quaternary structure predictions. The group has also shown how transcriptional regulatory networks evolve by gene duplication, and how network topology is dynamically adapted to cellular conditions. Current work combines genomics and computational analysis to study T helper cell differentiation, and accordingly how immune systems defend us from disease.

This is only the second time that the lectureship has been awarded to an LMB scientist, the first being Jason Chin in 2009.The Francis Crick Lecture was established in 2003 with an endowment from Sydney Brenner, the late Francis Crick’s close friend and former colleague. Recipients are early career stage scientists chosen by the Council of the Royal Society on the recommendation of the Biological Sciences Awards Committee.

This year’s Lecture takes place at the Royal Society from 6.30-7.30pm on Wednesday 21 November. The event is free to attend – no tickets are required. Doors open at 6pm and seats are allocated on a first-come-first-served basis.

The lecture will be webcast live on the Royal Society website and a recorded video will be available a few days afterwards.