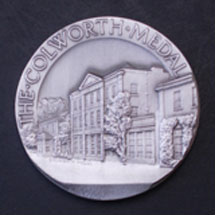 Dr Sarah Teichmann has won the Biochemical Society’s 2011 Colworth Medal. The medal is awarded annually to a biochemist under the age of 35 for outstanding research achievement. The award was made in recognition of her groundbreaking work on elucidating principles of the evolution and dynamics of transcriptional regulatory networks and protein complexes.

“I am delighted and honoured to receive this prize in the centenary year of the Biochemical Society. It is fantastic that my work in the area of computational and systems approaches to molecular biology is recognized in this way. I am privileged to be working at the interface between disciplines, and it is very exciting to start building bridges between informatics, genomics and other areas.”

Sarah read Natural Sciences (Biochemistry) at Trinity College, Cambridge, graduating in 1996. She carried out her PhD in computational genomics at the LMB, and received the Max Perutz Student Prize and a Trinity College Research Fellowship in recognition of this work in 1999. She spent two years at University College London as a Beit Memorial Fellow, before returning to Cambridge in 2001 as a Programme Leader at the LMB and Fellow of Trinity College.
She has made seminal contributions to understanding how protein families recombine within multi-domain proteins and to the evolution and dynamics of transcriptional regulatory networks. More recently she has shown that assembly pathways reflect evolutionary pathways of protein complexes (Levy et al., Nature. 2008. 453:1262-5).

In 2003, Sarah was elected an EMBO Young Investigator, and received the Science & Technology Women of the Future award in 2009. The Colworth Medal is further recognition of Sarah’s scientific output.

Dr Cyrus Chothia, Sarah’s colleague and PhD supervisor, commented: “Sarah is a delight to work with. Her work is producing fundamental results in the field of genomics which will revolutionize biology. And it’s also great fun!”

Sarah will present her award lecture at the Royal Society on Friday 16 December 2011.