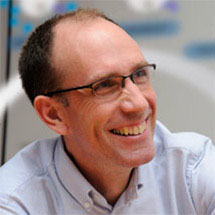 Sean Munro, group leader in the LMB’s Cell Biology Division, has been elected as a Fellow of the Royal Society.

Sean is distinguished for his outstanding research into the organisation of the intracellular membranes of eukaryotic cells. His work is focussed on the Golgi apparatus, an organelle that plays a central role in the sorting and modification of proteins in the secretory pathway. He is primarily interested in how the Golgi is recognised by the many peripheral membrane proteins that are specifically targeted to this organelle.

Many different membranes face the cell’s cytoplasm and yet carriers that mediate traffic between organelles must fuse with only the correct membranes. In addition, many cellular processes occur only on the surface of specific organelles. This creates a formidable organisational problem for the cell. Sean’s work looks at the proteins that act in vesicle tethering, the initial interaction between carriers and target organelles that precedes membrane fusion. He has demonstrated that these peripheral Golgi proteins are targeted to the organelle through a combination of lipid and small GTPase binding, whereas Golgi-resident enzymes depend on their transmembrane domains for their location. An understanding of how organelle identity is established and recognised is only starting to emerge but promises to reveal much about the underlying logic of the organisation of eukaryotic cells.

The Royal Society seeks to promote excellence in science through its Fellowship and Foreign membership. Each year, the Royal Society elects 44 distinguished scientists who have made substantial contributions to the improvement of knowledge in the sciences. This year’s electees also include Professor Thomas Steitz, a former Postdoctoral Fellow of the LMB, who has been elected as a foreign member.