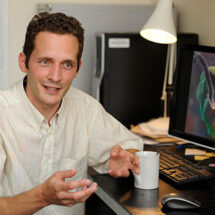 Sjors Scheres, a Group Leader in the LMB’s Structural Studies Division, has been elected as a Member of the European Molecular Biology Organisation (EMBO).

Founded in 1964 to promote molecular biology in Europe, EMBO elects new members annually on the basis of scientific excellence and outstanding research contributions.  The organisation promotes excellence in life sciences by supporting talented researchers, and stimulating the exchange of scientific information.

Sjors’ work focusses on the development of methods that allow visualisation of molecular machines, the large and flexible macromolecular assemblies that fulfill a wide range of vital processes in the cell.  Modern electron microscopes allow visualisation of individual assemblies that are frozen in a thin layer of ice and thus free to adopt any functional conformation. Sjors uses three-dimensional electron microscopy (3D-EM) and statistical image processing techniques to obtain and analyse images from distinct conformational states. He then combines these snapshots into a “3D molecular movie” that can help to illustrate how the molecular machine works.  Sjors has been instrumental in the development of RELION, a stand-alone computer program used for the refinement of multiple 3D reconstructions in the field of electron cryo-microscopy (cryo-EM).  His work has also led to the visualisation of a variety of molecular machines, including ribosomes, spliceosomes and gamma-secretase. Understanding how these machines perform their complicated tasks in the living cell can give an insight into how their malfunction can cause disease and can provide information for structure-based drug design which may ultimately lead to advances in treatment.

EMBO membership is a life-long honour and Sjors joins more than 1700 of the best researchers from Europe and around the world.  He will be formally welcomed at the EMBO Members’ Meeting in Heidelberg between 18th-20th October 2017.