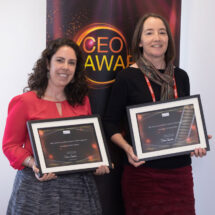 Three members of the LMB have been recognised for their contributions to the MRC at the annual MRC CEO Awards. Kristin Webster and Denise Walker received the prize for Public Engagement, whilst Arwen Tapping was runner-up for the Rising Star award.

Launched in 2012, the MRC CEO Award scheme recognises contributions from employees for outstanding effort and commitment to both their work and the MRC. The MRC CEO Awards are open to everyone, working in both scientific and administration fields, with staff being nominated by their colleagues. This year’s winners and runners up were selected from over 60 nominations.

Kristin and Denise, from the LMB’s Neurobiology Division, have co-created a C. elegans based outreach activity, ‘Worms are cleverer than you think!’ The activity – which consists of four stations, supported by a colourful workbook and cartoon worm stickers collected when each station has been visited – aims to enthuse children about science and increase understanding of how nematode worms can be used in research. The activity has featured at the Cambridge Science Festival, the LMB Open Day, Cambridge Big Biology Day and there are plans to bring the activity into primary schools. In addition, a new website is being developed to share the activity resources so they can be used in public engagement by scientists around the world.

Kristin and Denise have developed the activity with passion and enthusiasm. They have trained over 30 LMB volunteers to deliver the activity, a number of whom have gone on to help at other events and develop their own engagement ideas. Both Denise and Kristin are proactive champions for public engagement at the LMB and are happy to help and get involved with new activities: both are helping to develop and deliver a new ‘challenge project’ for 20 year 11 pupils in early 2018 based around DNA, taste and nematode worm behaviour.

Kristin said: “We were excited and thankful to have our work with ‘Worms are cleverer than you think!’ honoured with an MRC CEO Award. The support we’ve had over the last year as we launched this new outreach program is a testament to the commitment by both the LMB and the MRC to enable scientists to share our research with the people in our local community. We’re very thankful for the chance to share how we use worms in neuroscience research in such a fun and interactive manner.” 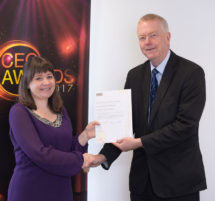 Arwen joined the LMB as a newly qualified Librarian and had not previously run a Library. Although Arwen’s role was initially as maternity cover for the previous librarian, when this individual resigned, Arwen took on the role permanently. Over the last three years Arwen has again and again demonstrated her skill in running a Library. The LMB Library and associated services are in very capable hands and Arwen’s work is well-regarded by many members of the LMB. Arwen is now working on her Chartered Institute of Library and Information Professionals accreditation.

Arwen said: “It was a lovely event and a great opportunity to hear about what other nominees from other parts of the MRC have done. I feel flattered that my colleagues felt that my efforts as LMB Librarian were worthy of a nomination and proud to be shortlisted.”