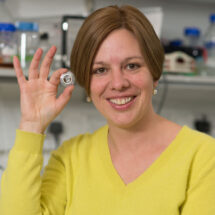 A jewellery heirloom has been passed to Lori Passmore on International Women’s Day to honour her major contribution to science. Lori, from the LMB’s Structural Studies Division, is one of 11 female scientists chosen for their scientific achievements and ability to inspire others by last years awardees. Lori was nominated by Professor Shannon Au from the University of Hong Kong.

The Suffrage Science Scheme was set up five years ago by the MRC Clinical Sciences Centre. It is a unique awards scheme aimed at raising the numbers of women in senior leadership roles in science. The awards are heirloom items of jewellery, similar to those worn by the Suffragettes, which were designed by art and design students at Central St Martins in collaboration with scientists and inspired by research, and passed from awardee to awardee each year.

Lori’s research studies how the proteins inside our body’s cells can come together to form complexes. Her group explores the roles that these complexes play in controlling the expression of genes, and how faulty gene expression can contribute to diseases such as cancer and neurological disorders. Using electron cryo-microscopy (cryo-EM), X-ray crystallography and other techniques, Lori is determining the structures of these multi-protein complexes and researching their molecular mechanisms, activities and regulation. She is also developing new methods with cryo-EM to help determine protein structure, including the development of new specimen grids made of pure gold, that improve the quality of cryo-EM images and allow scientists to unravel the details of how complex biological machines inside cells work.

Lori has been a group leader at LMB since 2009. She came to the LMB in 2004 as a Career Development Fellow after completing her PhD at The Institute of Cancer Research, London. Originally from Canada, she studied biochemistry at the University of British Columbia. She was awarded a prestigious European Research Council grant (2011) and an EMBO Young Investigator Programme Award (2014).

Lori received her award at a ceremony held at the Royal Society, London on Tuesday 8th March, which celebrated women already in science and encouraged others to enter scientific subjects. The awards are sponsored by L’Oreal-UNESCO For Women in Science scheme and The Royal Society. Lori is the second LMB recipient of the award, following Sarah Teichmann who received the award in 2012.