Home > LMB News > The Chancellor, George Osborne, visits the LMB in his support for science 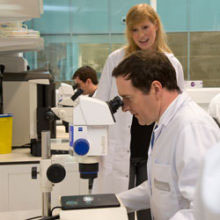 The Chancellor of the Exchequer, George Osborne, visited the LMB this morning to announce details of the Government’s long-term plan for science capital investment.

Mr Osborne was welcomed by the LMB Director, Hugh Pelham, and shown some of the world-class facilities in the Laboratory, which was opened by Her Majesty The Queen last May.

In his speech, the Chancellor announced that he was committing long-term funding to science, which was vital to attract researchers and investment. He confirmed, “we will deliver, over the next 5 years, the biggest sustained programme of investment in new science capital ever”. The Chancellor promised £7 billion of capital investment in science, during the rest of this decade, “we have to give British science the funding it needs for the long term.”
He also announced the launch of a consultation with scientists to decide which areas of research had the highest potential. “The government is committing a historic £7 billion to science investment. We’re asking you, the science community, and the business community too, how best to invest that funding”

“It is very encouraging to hear of a long term commitment to science funding, with a real increase in capital expenditure. This will help to keep the UK internationally competitive, and offers a great opportunity for the science community to decide its own priorities.”Hugh Pelham 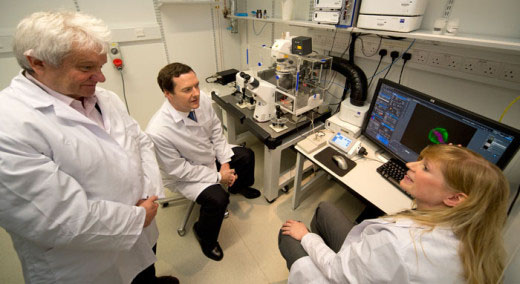 On his visit, the Chancellor was introduced to the work of Melina Schuh, a group leader in the LMB’s Cell Biology Division. Melina’s research shows how fertilisable eggs (oocytes) develop in mammals, with the long-term goal of identifying and analysing mechanisms that lead to abnormal eggs, which are the leading genetic cause of miscarriage and congenital birth defects. Her group mostly works with mouse oocytes as a model system, but they have recently also started to study chromosome separation in live human oocytes. Her laboratory is the first in the world to pioneer this field.