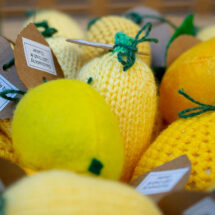 The annual LMB art show this year expanded its remit to include craft, in particular the work of the newly formed LMB Craft & Chatter group.  The group exhibited a variety of crochet and needlework, alongside art show favourites of paintings, drawings, photographs and paper craft.

Over 20 exhibitors participated, with photography being one of the most popular categories.  Many of these pieces highlighted staff’s other passion – travelling – with images capturing visits to Canada, China and beyond.  Children and animals, in particular an engaging set of dog studies, was also popular. Colourful and thought-provoking paintings were also much in evidence, as well as exquisite drawings and watercolours.

The LMB Craft & Chatter group, lead by Jillian Deans, put together a bowl of crocheted, knitted and stitched lemon stress balls – ‘if life gives you lemons, make lemonade’ – which were distributed after the show to staff who had put their name into the lemon prize draw.  The group, part of the LMB’s health & wellbeing initiative, meets monthly during lunch time to work on individual crafting projects and joint charity and community projects. Jillian herself contributed a crocheted rock pool, full of creatures from the sea, including an octopus, shrimps, seaweed and assorted shells – all watched over by a seagull. 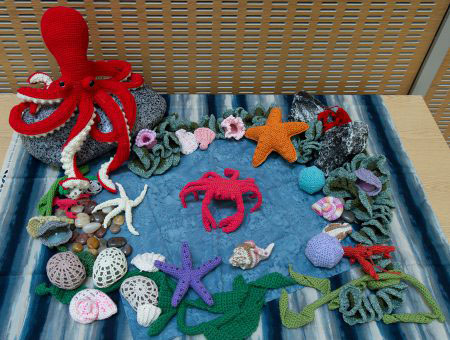 This year’s show also welcomed guest exhibitors.  Staff from the MRC Elsie Widdowson Laboratory, in nearby Fulbourn Road, contributed a large selection of photographs and watercolour drawings.  A group from the Lab later visited the exhibition.

Also on show was artwork from the recent Cambridge Soapbox Science, where scientists were partnered with artists.  The LMB’s Nicola Smyllie showcased her science at the event, and at the art show displayed a microscopy image of the master circadian clock showing different neuronal types, alongside the corresponding painting by local artist Diek Ozgit, who represented Nicola’s work in a more visual presentation.

David Street, organiser of the show, commented, “this very popular event gives members of the Lab the opportunity to share their creative side through the media of art.  The show filled the atrium with a spectacular display of arts and crafts providing an oasis of calm, reflection, and inspiration for staff.”

The show ran for two weeks and proved very popular, with a large number of staff taking time to explore the exhibits.  It was a fantastic way for individuals to show their creative side and to liven up the work space with colour and art. 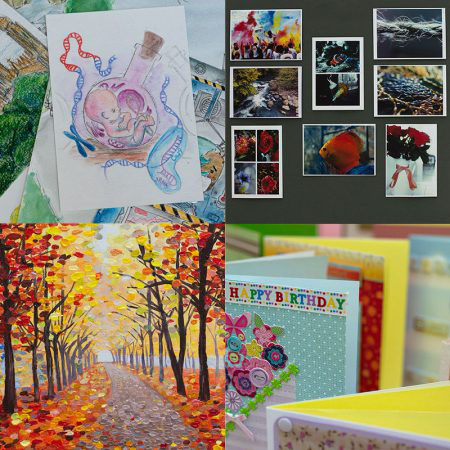