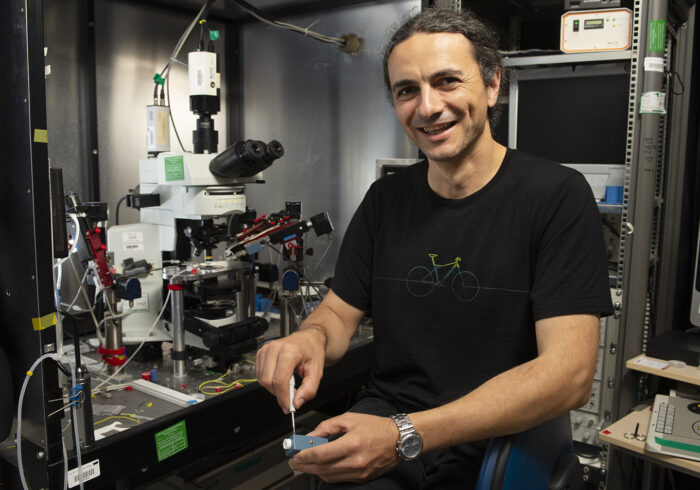 The LMB is delighted to announce the appointment of Albert Cardona as a Group Leader in the Neurobiology Division. Albert joins the LMB to continue his research into how the structure of a neural circuit relates to its function.

Our thoughts and behaviours are products of the ability of our brains to combine inputs from the senses such as vision, hearing, smell, taste, and touch, along with memories of past experiences and instinctual responses. To improve our understanding of how this is possible, Albert’s group will investigate both the internal circuits of individual areas of a brain and also the signals that are exchanged between different areas.

Albert’s group previously produced a synaptic resolution image of a whole nervous system from a Drosophila vinegar fly larva, devised methods to reconstruct its neurons, and mapped the connectivity wiring diagram of many areas of its nervous system. They now aim to study the complete wiring diagram of this complete nervous system, so that the functional role of each connection can begin to be understood. Albert’s group then plan to use this information to develop and experimentally test theoretical models that can explain the variety of animal behaviours elicited by different stimuli.

Albert’s group is also interested in identifying recurring patterns of connectivity between certain types of neurons, known as circuit motifs, and comparing these across different species. A greater understanding of the roles played by these general motifs in insect brains will reveal the fundamental rules of information processing in neural circuits and inform the future study of mammalian brains, including our own.