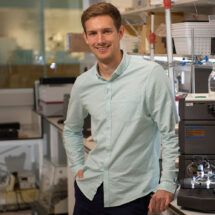 The LMB is delighted to announce the appointment of Benjamin Falcon as a Group Leader in the Neurobiology Division, starting in October 2019. Benjamin will work on the mechanisms by which the formation of amyloid contributes to nerve cell degeneration in neurodegenerative disease. The assembly of a limited number of proteins into amyloid – stacked protein strands that form filamentous structures – underlies all cases of neurodegenerative disease, including amyotrophic lateral sclerosis (ALS), frontotemporal dementia and Alzheimer’s disease. His group will combine structural and cell biology, using high-resolution electron microscopy with human samples and advanced cell culture systems to determine, in situ, the molecular interactions between amyloid assemblies and brain cells that give rise to different diseases in the human brain.

This mechanistic understanding will help in developing ways to diagnose and treat neurodegenerative diseases, which have been described as the greatest health challenge of our time due to their increasing prevalence worldwide. They currently affect over fifty million people, with approximately ten million additional cases arising each year, and there are no disease-modifying therapies exist and early diagnosis is not possible.

During his postdoctoral fellowship, Benjamin helped determine the first atomic structures of amyloid assemblies from patients’ brains, revealing that tau filaments in Alzheimer’s disease, the frontotemporal dementia known as Pick’s disease, and the head impact-induced disease chronic traumatic encephalopathy have intricate disease-specific structures. This work supports the hypothesis that the structure of assembled tau contributes to the diversity of neurodegenerative diseases.

Benjamin completed his PhD at the LMB with Michel Goedert in the Neurobiology Division, followed by a postdoctoral fellowship in the groups of Michel Goedert and Sjors Scheres in the Structural Studies Division. In 2019 he was awarded the Rising Star Award by Alzheimer’s Research UK. The LMB looks forward to Benjamin’s pursuit of critical structural and cell biology questions in the field of neurodegenerative disease.