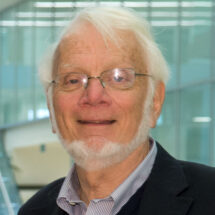 Tom Steitz, Nobel Laureate, known for his ground-breaking work on the structural basis of the central dogma including the ribosome, died on Tuesday 9th October, at the age of 78.  Tom was Sterling Professor of Molecular Biophysics and Biochemistry, and Professor of Chemistry at Yale University, USA.  He and his wife Joan were postdoctoral scientists at the LMB for 3 years from 1967 to 1970. They remained good friends of the LMB all their lives.

Tom was born on 23rd August 1940 in Milwaukee, Wisconsin, USA.  He attended Lawrence College, USA on a full scholarship, majoring in Chemistry and then became a graduate student at Harvard.  He initially planned to work on biophysical studies of nucleic acids, but after attending lectures given by Max Perutz, in which Max presented the first atomic resolution protein crystal structure, that of myoglobin, he was enthused to do protein crystallography.  He joined W N (Bill) Lipscomb’s group, and undertook his PhD working on the structure and mechanism of carboxypeptidase A.

In 1967, Tom joined the LMB as a postdoc, working in David Blow’s group on the structure of chymotrypsin, alongside Richard Henderson, then a young graduate student. Tom and Richard worked together on determining the X-ray crystal structures of chymotrypsin complexes with substrate analogues. They determined several structures, including the complex with N-formyl tryptophan at 2.7Å resolution.  From this structure they could confirm and elaborate on the catalytic mechanism of peptide bond hydrolysis by chymotrypsin.  With advice from Brian Hartley, they were also able to build a homology model of trypsin to understand how it recognises Arg or Lys sidechains, the source of its substrate specificity.  Tom described his time at LMB as “the most important time in the development of my future research direction and my perspective on how creative science should best be done”.

Tom moved to Yale in 1970 to set up his own lab, and began by determining the structure of hexokinase, an enzyme that phosphorylates hexoses (six-carbon sugars), forming hexose phosphate. The enzyme was one of the early examples of allostery.  His lab then concentrated on the structural basis of the central dogma of molecular biology, DNA->RNA->protein.  His group worked out the structures of tRNA synthetases and their complexes, the Klenow fragment of DNA polymerase, Taq polymerase, T4 DNA polymerase, T7 RNA polymerase, HIV reverse transcriptase, recA and many other enzymes and co-factors that form the central core of structural molecular biology.  This work culminated in a collaboration with Peter Moore (another LMB alumnus), on the structure of the 50S ribosomal subunit and its complexes with many substrates to help elucidate the mechanism of peptidyl transfer. The work definitively established that the ribosome is a ribozyme. Tom’s lab also obtained the structures of complexes with many families of antibiotics (the ribosome is a major target of antibiotics) and and was one of the founders of Rib-X Pharmaceuticals (now Melinta Therapeutics) to design and create new antibiotics to combat resistant bacterial strains.

Tom stayed at Yale for the rest of his career, helping to make it the place it is today. For his work on the ribosome, Tom received the 2009 Nobel Prize in Chemistry with Ada Yonath and Venki Ramakrishnan.  He was a member of the National Academy of Sciences, a Fellow of the American Academy of Arts and Sciences, a Howard Hughes Medical Institute Investigator and a Fellow of the American Academy of Microbiology. He was elected a Foreign Member of the Royal Society in 2011.

Jan Löwe, LMB Director, commented, “Tom was a trailblazer, constantly pushing the boundaries of crystallography to tackle fundamental problems. Many of his structures took years and often over a decade to solve. Tom also remained an ardent supporter of the LMB throughout his career. He will be sorely missed.”

Richard Henderson, who had a bench in Tom’s lab at Yale in 1972-73 and worked with Tom at LMB in the 1960s, said “Tom was a wonderful scientist who had both a vision and the ability to deliver numerous ground-breaking scientific research accomplishments.  He was an all-round expert, skilled as an experimentalist, visionary, mentor and leader. His students were often worried about being outclassed when Tom would roll up his sleeves and get back to the bench”.

Venki Ramakrishnan, who was a postdoc at Yale with Tom’s collaborator Peter Moore, said “Tom was one of the great structural biologists of our era who has left a huge legacy both in his work and in the large number of leading scientists he has trained. He was both an inspirational role model and a warm and supportive personal friend. I will deeply miss him.”