The Royal Society Philosophical Transactions is celebrating 350 years of publishing scientific research with a special issue of commentary articles. These articles look back at some of the major, historical, scientific landmarks in the physical and biological sciences, which were reported in Philosophical Transactions. Of the 17 biological papers chosen, which include papers by Antonie van Leeuwenhoek, Alan Turing and Peter Medawar, two are for pioneering work undertaken at the LMB. 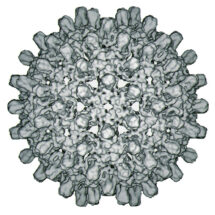 In the special issue of Philosophical Transactions, Peter Rosenthal, from the MRC National Institute for Medical Research, explains how determining the structure of biological macromolecules and assemblies has been vital to understanding the roles they play in living processes. Methods for three-dimensional structure determination from images recorded in the electron microscope were a key development in this area. Since Tony’s 1971 paper computational methods of image analysis have been extended to systems with lower or no symmetry. Further experimental advances, combined with image analysis, have led to the method of electron cryomicroscopy, which is now being used to study the structure and dynamics of biological assemblies and machines in atomic detail. Computational image analysis has become essential for observing and trying to understand the dynamic structure of life. 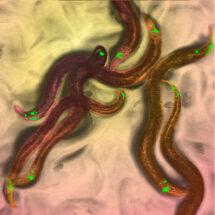 Structure of the nervous system of the nematode worm

John White, Eileen Southgate, J. Nichol Thomson and Sydney Brenner, formerly of the LMB’s Cell Biology Division, published their paper on ‘The structure of the nervous system of the nematode Caenorhabditis elegans’ in 1986. It was the first time a complete set of synaptic connections in the nervous system of an animal had been determined. The functional properties of a nervous system are largely determined by the characteristics of its component neurons and the pattern of synaptic connections between them. However, little was known about the detailed connectivity of networks of neurons, mainly due to the enormous complexity of most systems. Using the relatively simple, small nervous system of the nematode worm, C. elegans, the LMB team completed a reconstruction of the nervous system from electron micrographs to produce a map of the ‘mind of a worm.’

Scott Emmons, from the Albert Einstein College of Medicine, in the special issue of Philosophical Transactions, discusses how this work was a major stimulus to the field of C. elegans research, an area that contributed insights into all areas of biology. It also began the field of connectomics: the production and study of comprehensive maps of connections within an organism’s nervous system. With further developments in the field, most notably more powerful computers, it is hoped that one day knowledge of the more complex human connectome, together with results from many other investigations, will lead to an understanding of the human brain