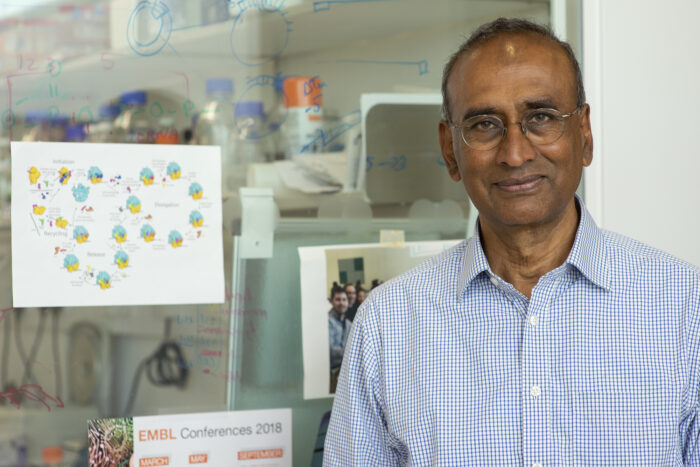 Venki Ramakrishnan, Group Leader in the LMB’s Structural Studies Division, has been selected to the Order of Merit. Venki is one of six individuals chosen by Her Majesty Queen Elizabeth in early September, and recently announced by His Majesty The King.

The Order of Merit, founded in 1902 by King Edward VII, is a special mark of honour conferred by the Sovereign on individuals of exceptional distinction in the armed forces, science, arts, literature, or for the promotion of culture. Appointments to the Order are in the Sovereign’s personal gift. The Order is restricted to 24 members.

Venki’s research focuses on the structure and function of the ribosome, the molecular machine that synthesises proteins by translating genetic information held in mRNA, and on the action of antibiotics on this process. Bacterial ribosomes are different from those in higher organisms, making them good targets for drugs, so this information is critical in developing new antibiotics to combat infection and disease. For this work Venki shared the Nobel Prize for Chemistry in 2009 with Tom Steitz and Ada Yonath and was awarded a knighthood in 2012. His group currently focuses on the function of ribosomes in higher organisms and in mitochondria, and on the regulation of protein synthesis. He has also written Gene Machine, a popular book on the race for the structure of the ribosome, and is currently writing a book on why we age and die.

Venki has been a Group Leader at the LMB since 1999, Joint-Head of the Structural Studies Division from 2005 to 2015 and Deputy Director of the LMB from 2013 to 2016. He was elected a Fellow of the Royal Society in 2003, and is also a member of the U.S. National Academy of Sciences, Leopoldina (the German Science Academy) and a Foreign Member of the Indian National Science Academy. He served as President of the Royal Society from 2015 to 2020, a role which encompassed Britain’s decision to leave the European Union, and the COVID-19 pandemic. He publicly led the scientific community’s response to these challenges.

New appointments to the Order of Merit
Venki’s Group page