Home > LMB News > What next after Academia? Three ways to forge a career away from the bench 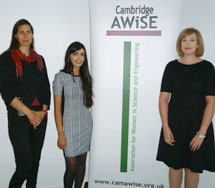 A recent event held at the LMB showed how a PhD in science can lead to various exciting careers outside the lab, including working in Science Policy, Communications and Administration.

The joint LMB-Cambridge AWiSE event, which took place on Wednesday 4th June, attracted a large audience of PhD students and post-docs from around Cambridge to hear speakers Sobia Raza, Katia Smith-Litière and Danielle Hoyle. Each speaker described her current job and the career path taken to reach that point. The trio all carried out PhDs in the life sciences but their paths diverged soon afterwards, and their subsequent careers panned out in very different ways.

Sobia’s move into Science Policy was planned during her PhD, when she took advantage of a paid internship in the Scottish Parliament near the end of her studies. That gave her the experience to secure her current project management role with the Public Health Genomics Foundation.

Katia, however, carried out a post-doc and became a science consultant before taking a career break to look after her young family. A series of volunteer positions and chance encounters with like-minded scientists led to her co-founding the Cambridge Science Centre.

Finally, Danielle demonstrated how thinking about your interests and skills while planning your next career move can lead to a series of fulfilling scientific roles. Following a short post-doc, Danielle landed a position in scientific publishing, then became a grants adviser at the Wellcome Trust and has recently taken up a post as manager in the new Grants Department at the Babraham Institute.

The presentations and panel discussion revealed a number of common themes in the advice for moving away from the bench. These included: identify the transferable skills you have gained from research, tailor your CV to showcase these skills, and be confident and bold in your abilities and career decisions.

The speakers shared their enthusiasm for using their scientific knowledge and training in careers away from academia, proving that research is not the only fulfilling path to choose.