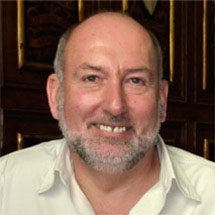 Steve West will give the 2012 Max Perutz lecture on Thursday 13 September at 4.15pm in the Max Perutz Lecture Theatre at the LMB. The lecture, entitled “Defective DNA strand break repair, genome instability and cancer” is open to all interested in attending.

Steve West is known for pioneering studies on homologous recombination, and for defining the links between recombinational repair and genome instability diseases, including cancer. He is currently Deputy Director at the Clare Hall Laboratories in Hertfordshire, part of the London Research Institute of Cancer Research UK. Steve is a Fellow of the Royal Society and a member of EMBO and he has been awarded many medals and prizes, including: the Louis-Jeantet Prize for Medicine (2007), the Novartis Medal from the Biochemical Society (2008), the GlaxoSmithKline Medal of the Royal Society (2010) and the Genetics Medal (2012).

Steve studied Biochemistry at Newcastle University and it was while studying for his PhD that he succeeded in showing that ‘protein X’ was the elusive RecA protein, which is essential for recombination in bacteria. On completing his PhD, Steve moved to Yale University in New Haven in 1978. While there, he purified and characterized the RecA protein, and in doing so uncovered many key aspects relating to the ways in which cells mediate DNA-DNA interactions and strand exchange. This work and parallel studies at Yale and at Stanford University provide the groundwork for our current understanding of the enzymatic mechanisms of recombination. In 1985 Steve returned to England and established his own group at the Imperial Cancer Research Fund (now known as Cancer Research UK).

All living organisms feature DNA repair pathways that safeguard the integrity of the genome, and mutations in proteins that mediate key events in DNA repair have been linked to genome instability and tumourigenesis. Homologous recombination provides an important DNA repair pathway that is needed for the restoration and restart of broken replication forks, for the rejoining of chromosome breaks, and for the processing of DNA crosslinks.

Mutations in genes that encode a variety of recombination proteins are linked to breast cancers and to inheritable diseases such as Blooms Syndrome (BS) and Fanconi Anemia (FA). In recent work, we purified the BLM protein (defective in BS), the BRCA2 (FANCD1) and PALB2 (FANCN) tumour suppressors (mutated in some cases of FA), and the newly discovered FANCP protein, also known as SLX4, and have initiated structure-function analyses to elucidate their molecular functions. How these proteins process DNA, and how they are regulated and controlled to direct the outcome of recombinational repair, is now revealing unexpected insights that extend our understanding of efficient DNA repair and tumour avoidance.

The lecture, named in honour of the LMB Nobel Laureate Max Perutz, is one of a series of lectures organised by the LMB and given by eminent scientists from around the world.

Max Perutz arrived at the Cavendish Laboratory in Cambridge in 1936, to work in the field of X-ray crystallography. This move would lead to him becoming a pioneer in the new field of molecular biology, co-founding a world-class research laboratory and developing a technique to unlock the structures of proteins.

Max played a key role in the history of the LMB. He was Director of the ‘MRC Unit for Research on the Molecular Structure of Biological Systems’ when it was established in 1947; and when the unit became the MRC Laboratory of Molecular Biology (LMB) in 1962, he became its first Chairman.

Max Perutz officially retired as Chairman of the LMB in 1979, having overseen the development of the MRC unit into a first class research laboratory. He died in Cambridge on 6 February 2002, aged 87.