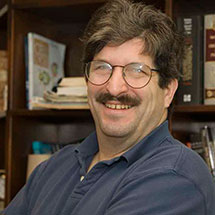 Gary Ruvkun will give the 2014 Max Perutz Lecture on Friday 5th December at 4.15pm in the Max Perutz Lecture Theatre at the LMB. The lecture, entitled “C. elegans surveillance of conserved cellular components to detect and defend pathogen attacks, real or imagined” is open to all interested in attending.

Gary Ruvkun is Professor of Genetics at Harvard Medical School. His research lab studies microRNA and RNA interference mechanisms, microbial diversity, neuroendocrine control of detoxification, immunity, metabolism, and ageing. His lab has also begun new studies on the genetic control of moulting and neurotransmitter tranport. He is also collaborating on a project to develop a miniature thermal cycler and protocols to send to Mars in search of microbial life.

Gary did his PhD at Harvard with Fred Ausubel working on exploring the symbiotic nitrogen fixation genes of Rhizobium. His post-doctoral research with Bob Horvitz at MIT and Walter Gilbert at Harvard saw him begin to work with C. elegans. Gary is a member of the American Academy of Arts and Sciences (2009) and National Academy of Sciences (2008) and has been awarded a number of prizes and awards, the most recent being the Breakthrough Prize in Life Sciences (2015).

RNAi-based gene inactivations targeting the core cellular components induce C. elegans to avoid the lawn of bacteria expressing those gene inactivating dsRNAs. Many of these gene inactivations that cause aversive behaviors encode the most conserved proteins of eukaryotes, from the ribosome, mitochondria, cytoskeleton, and proteasome. And many are targets of antibiotics produced by fungi and microbes. Toxins that target the same proteins also cause these aversive behaviors. C. elegans pathogen response and detoxification cytochrome p450 genes are also induced by E. coli expressing aversive C. elegans dsRNAs or drugs. Thus C. elegans interprets the E. coli that express just a single dsRNA that targets a C. elegans gene encoding a ribosomal protein for example as a pathogenic bacteria. A key prediction of this xenobiotic and bacterial virulence factor surveillance model is that even a chromosomal mutation disrupting for example a surveilled ribosomal component will cause induction of detoxification and pathogen responses. As predicted, various mutations that cause translation defects only in the germline induce the expression of particular cytochrome and ABC transporter genes in the intestine. In a functional genomic screen for animals that now fail to express these detoxification responses to these germline translation defects, that animals that are now “blind” to their translation defects, we found a kinase signaling cascade to p38 MAPK and to the ZIP-2/bZip and SKN-1/Nrf2 transcription factors and upstream steps in a lipid biosynthetic pathway. Mammalian bile acids can rescue the defect in detoxification gene induction caused by these C. elegans lipid biosynthetic gene inactivations. Similarly, crude hydrophobic extracts prepared from C. elegans with translation deficits but not extracts from wild type can rescue detoxification gene induction. These bile acids are likely to be a hormonal signal of translational malaise between the germline and the somatic intestine. Germline translation defects induce p38 MAPK phosphorylation and nuclear localization in the intestine and particular kinase and lipid biosynthetic genes that emerged from the RNAi screen act upstream of this, ordering the pathway components identified. These eukaryotic antibacterial countermeasures are not ignored by bacteria: we identified 3 bacterial species that actively suppress C. elegans detoxification responses to ribosomal mutations.
This screen identifies genetic components of the core cellular component surveillance systems, the endocrine systems of spreading the detoxification signal systemically, and the coupling of these signals to upregulation of xenobiotic detoxification and anti-bacterial pathogenesis systems. Human variation in the homologues of these genes may underlie aberrant upregulation of drug detoxification and innate immunity pathways in the absence of a toxic or pathogen, for example, autoimmunity or feeding dysfunctions. The endocrine state of our aversively stimulated C. elegans may be homologous to the endocrine state of humans who feel unwell. The genetic suppressors of this aversive behavior we have identified may reveal an endocrinology of feeling ill or well.

The lecture, named in honour of the LMB Nobel Laureate Max Perutz, is one of a series of lectures organised by the LMB and given by eminent scientists from around the world. Max Perutz arrived at the Cavendish Laboratory in Cambridge in 1936, to work in the field of X-ray crystallography. This move would lead to him becoming a pioneer in the new field of molecular biology, co-founding a world-class research laboratory and developing a technique to unlock the structures of proteins. Max played a key role in the history of the LMB. He was Director of the ‘MRC Unit for Research on the Molecular Structure of Biological Systems’ when it was established in 1947; and when the unit became the MRC Laboratory of Molecular Biology (LMB) in 1962, he became its first Chairman. Max Perutz officially retired as Chairman of the LMB in 1979, having overseen the development of the MRC unit into a first class research laboratory. He died in Cambridge on 6 February 2002, aged 87.

Poster for the Max Perutz lecture