Home > Insight on Research > A switch in the brain 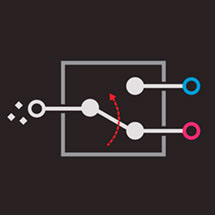 Research from Greg Jefferis’s group in the LMB’s Neurobiology Division has uncovered a biological switch that determines which part of the fruit fly’s brain responds to pheromones, depending on whether the fruit fly is male or female. Previous studies have identified differences in brain structure between the sexes but this study, published in Cell, is the first description in any animal of a specific change in nerve cell wiring that reroutes information between male and female brains.

Sex pheromones are chemicals that allow male and female animals to communicate by smell. In some cases it is known that exactly the same pheromone molecule can produce distinct behavioural responses in both males and females. Since both sexes respond to the molecule, there appears to be a difference in brain perception rather than sensory detection. For example in fruit flies, a male sex pheromone called cVA can stimulate females to mate with a male, while repelling other males at the same time. Greg’s group have been investigating exactly how the processing of this pheromone differs between male and female brains.

Jonny Kohl, Aaron Ostrovsky and Shahar Frechter from Greg’s lab first identified and labelled two groups of nerve cells inside the fly brain that respond to pheromones using a green fluorescent protein. One group of nerve cells responded to pheromone only in male brains, while the second group responded only in females. This difference in response depended on a changeover switch that rerouted incoming pheromone information to different groups of olfactory neurons in male and female flies.

Further experiments showed that this switch is set by the action of a control gene, called fruitless. Genetic manipulations allowed them to make a small number of nerve cells male in an otherwise female brain; this helped to pin point the exact location in the brain and the gene controlling the switch. The fruitless gene had previously been shown to control fruit flies’ sexual behaviour but exactly how it could achieve this through changes in brain wiring was unknown.
One of the biggest challenges in biology today is to understand how the pattern of connections between individual nerve cells allows the brain to process and store information and respond to the outside world. Looking at the differences between the male and female brains of a species is one powerful approach to study the relationships between brain wiring and behaviour. Until now it has proven very difficult to identify specific and reproducible differences in brain wiring and understand how they could alter the flow of information between male and female brains. This research has now shown how this occurs in flies. Sex differences in brain structure and behaviour have been documented in organisms from worms to humans. This study suggests a general mechanism by which males and females could perceive or interpret the same stimulus, such as smell, differently. The same form of genetic regulation of wiring might also be at the origin of behavioural differences across species.