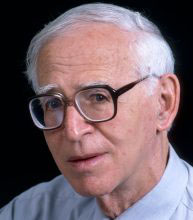 Aaron Klug, Director of the LMB from 1986 to 1996, President of The Royal Society from 1995 to 2000 and 1982 Nobel Laureate, died on Tuesday 20th November 2018. Aaron was instrumental in revealing the structures of complex biological molecules, from viruses to tRNA, to chromatin and zinc fingers. His most important contribution to scientific research was his painstaking development of crystallographic electron microscopy. This combines the techniques of electron microscopy and X-ray diffraction to recover three-dimensional structural information from two-dimensional electron micrographs. For this he was the sole recipient of the 1982 Nobel Prize in Chemistry.

Aaron was born in Zelvas, Lithuania on 11th August 1926. When he was two years old his family moved to Durban, South Africa. Aaron attended Durban High School before completing a B.Sc. at the University of Witwatersrand in 1945, and an M.Sc. at the University of Cape Town in 1946. Initially, he was drawn to a medical career but soon switched to science, studying chemistry, physics and mathematics. He became a junior lecturer in Cape Town’s Physics Department and worked on X-ray analysis of small organic compounds. He developed a strong interest in the structure of matter and how it was organised. In 1949, he came to Cambridge as a research student at the Cavendish Laboratory of Physics under the supervision of D. R. Hartree. He was awarded his PhD in 1953 on ‘The kinetics of phase changes in solids’.

In 1954, Aaron became a Nuffield Fellow in the Crystallography Laboratory, in J. D. Bernal’s Department of Physics at Birkbeck College, London. It was here that he met Rosalind Franklin, who was working on the structure of tobacco mosaic virus (TMV).  Aaron said: “I was able to interpret some of Franklin’s beautiful X-ray diffraction patterns of the virus particle. From then on, my fate was sealed”. Following her death in 1958, he became Head of the Virus Research Project and took over her group. By this time, discussions were already underway for the group to move to the LMB.

In 1962, Aaron joined the LMB’s Structural Studies Division, and continued to work on the structure of TMV, he also began looking at the structures of spherical viruses. Aaron argued that viruses used self-assembly, a term he coined, to explain that the instructions are built into the individual units from which the structure is composed. This research was undertaken using, at first, X-ray diffraction, and then electron microscopy (EM). Throughout, Aaron was assisted by John Finch, who had originally joined Rosalind Franklin as a graduate student, and who moved with the virus group to Cambridge. The close study of electron micrographs of viruses led to the development of crystallographic electron microscopy and quantitative methods for their analysis, leading to general methods for calculating three-dimensional maps of specimens. These methods were taken up worldwide in many fields of research. This work also established many of the basic rules governing structure and self-assembly of viruses.

Aaron’s interest soon diversified to include work on the structure of DNA and RNA, and his group was the first to determine a number of key structures.  The crystal structure of yeast phenylalanine tRNA was solved in 1974, and later that of a hammerhead ribozyme RNA. Discussions with Francis Crick led Aaron to analyse the nucleosome core and higher order structures, which led to an understanding of how DNA is packed in chromosomes. Work on transcription factor binding to DNA led to the discovery in 1985 of zinc finger proteins, a class of proteins which bind specific DNA sequences by means of arrays of ‘fingers’, each of which interacts with a run of three or four base pairs. The modular nature of these proteins has made it possible to design synthetic proteins with a wide range of specificities, opening the prospect of targeted therapies for a wide range of diseases.  Aaron was also instrumental in starting work on neurodegenerative disease at the LMB. His input was central to our understanding of the role of the tau protein in Alzheimer’s disease.

Aaron was also a champion of other new developments, such as the program of large scale DNA sequencing, and as Director of the LMB greatly supported the work of John Sulston and colleagues in this field.  He played a pivotal role in the establishment of the Sanger Centre (now the Sanger Institute), and with John Sulston as its Director, the Sanger Centre played a key role in the international Human Genome Project, and is now a world-class institute in genomics.  In this, and many other ways, Aaron showed great foresight into the future of scientific research.

Aaron was an accomplished theoretician with a wide knowledge of mathematical physics who had the rare ability to apply his theoretical knowledge to the solution of practical problems. He was actively involved in the teaching of undergraduates, as well as in supervising many research students. For many years, he was Director of Studies in Natural Sciences at his college, Peterhouse. He was also highly imaginative. He read widely and remembered all he had read, which made him an interesting companion to scientists and non-scientists alike: he never fell for any extreme political creed, but kept a wisely balanced outlook on general affairs.

Aaron became joint Head of the LMB’s Structural Studies Division in 1977 and was Director of the LMB from 1986 to 1996. He became a Fellow of The Royal Society in 1969 and was its President from 1995 until 2000. In 1988 he was knighted and was appointed a member of the Order of Merit in 1995. Aaron continued as an Emeritus Scientist until 2012, when he retired from the LMB.

Michel Goedert, who worked with Aaron on the role of the tau protein commented “Aaron always said that curiosity was the most important quality for a scientist and that one had to live in interesting times.”

Richard Henderson, who followed in Aaron’s footsteps as joint Head of Structural Studies and later as Director, said “Aaron had a unique ability to see the strong and weak points in the experimental observations made by his colleagues and to inspire them to carry out more rigorous and adventurous research than they might have done without his incisive analysis.”

Tony Crowther, who collaborated with Aaron on image analysis, added “Aaron was a strong but fair critic, whose insights on contentious scientific matters generally proved to be correct.”