Aaron Klug overcame this limitation by taking images in different directions and combining them mathematically, using computers, to produce the 3D structure. He initially used this to determine the structure of viruses before studying the combination of protein and DNA in chromatin, of which chromosomes are made. Chromatin was broken into small fragments that could be examined. A model for chromatin was then proposed based on this knowledge of the structure of the fragments. The exact structure of chromatin affects how the genetic code along the DNA is read. This investigation is crucial in the understanding of cancer, in which the control of growth and division of cells by the genetic material no longer works.

Since the invention of 3D reconstruction, improvements in electron microscopes, in specimen preparation and in computers have led to huge advances in 3D microscopy and suitable specimens, such as viruses, can now be visualised in atomic detail. Sub-cellular structures can now be imaged by electron tomography and similar approaches have revolutionised medical imaging, where CT scanning is now used routinely in the diagnosis of neurological diseases and cancers.

“I like to think I would have achieved something elsewhere, but I could not have done what I have without so many able and gifted colleagues.”Aaron Klug 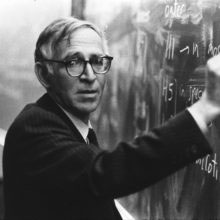