Antibodies are Y shaped molecules with two flexible arms. The detailed shape of the ends of the arms varies from one molecule to another, so providing a wide range of antigen binding sites. The ability of antibodies to bind specifically to substances is very useful in medical research, but it was difficult to produce large quantities of specific antibodies in the laboratory. The human immune system can produce more than two million different antibodies, each of which can recognise, bind to and destroy just one specific antigen.

César Milstein and Georges Köhler were trying to understand the mechanisms responsible for the remarkable diversity of antibodies. Through this research, they invented a way to stimulate cells to provide unlimited production of a specific antibody – a monoclonal antibody. It was recognised that monoclonal antibodies had the potential to diagnose and treat a wide array of diseases, but it would take twenty years before this approach could be applied to humans, following research led by Greg Winter and Michael Neuberger at the MRC Laboratory of Molecular Biology.

One of the most successful ways in which monoclonal antibodies have been used is in diagnostics – “tagging” a monoclonal with a fluorescent dye to see if it has attached to a specific antigen. This method can be used to diagnose cancers and AIDS. Monoclonal Antibodies are now also being used for therapies to treat diseases including rheumatoid arthritis, multiple sclerosis, some forms of cancer and viral infections. It has sparked an international multi-billion pound biotechnology industry: monoclonal antibodies are the basis of a third of all biotech products in clinical development.

César and Georges shared the Nobel Prize with Niels Jerne from the Basel Institute, Switzerland.

“The development of a method to produce monoclonal antibodies against a defined antigen has had a profound impact in many branches of research and signalled a shift in the analysis of biological problems.”César Milstein & Georges Köhler 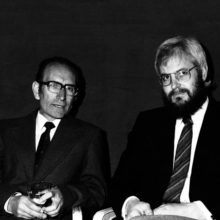