Following his work on proteins, Fred Sanger became interested in developing a technique to determine the exact sequence of the building blocks in DNA – called bases. Due to the very large size of DNA molecules, the problem was finding a rapid and simple method to determine sequences.

Fred initially developed methods to find out the genetic sequence of a virus, which had just over 5000 base pairs and was the first fully sequenced genome. This method was then extended to determine the much larger sequence of human DNA, and this was the most widely used analysis method from the early 1980s. Fred’s method relies on copying the DNA sequence, but it stops copying every time it hits a particular DNA base – of which there are only four types – A, C, G and T. By measuring the length of the incomplete copies, you can determine where that base occurs in the DNA. This sequence is read off an autoradiograph, a photographic record of a biological specimen, and gives a characteristic ‘striped’ pattern.

Fred’s method shaped the way that genomics and biomedicine were explored and was key to the Human Genome Project, an international collaboration to identify all the approximately 20,000-25,000 genes in human DNA. This has increased the understanding of many genetically based diseases including cancer. Knowledge about the effects of DNA variations among individuals can lead to revolutionary new ways to diagnose, treat, and eventually prevent the thousands of disorders that affect us. Differences at the DNA level between people are also the basis of DNA fingerprinting.

“…with people like Francis Crick around it was difficult to ignore nucleic acids or to fail to realise the importance of sequencing them.”Fred Sanger 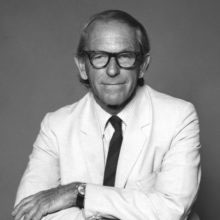