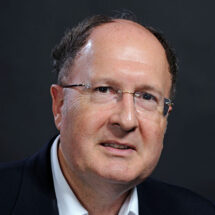 Greg Winter from the LMB’s Protein and Nucleic Acid Chemistry (PNAC) Division has been awarded the 2018 Nobel Prize for Chemistry. Greg shares half of this year’s prize with George P. Smith, with the other half being awarded to Frances H. Arnold, for developing a method known as phage display and using it for the directed evolution of antibodies, with the aim of producing new pharmaceuticals.

Speaking after today’s announcement, Greg responded, “It came as a bit of a shock, and I felt a bit numb for a while. It’s almost like you’re in a different universe. For a scientist, a Nobel Prize is the highest accolade you can get, and I’m so lucky because there are so many brilliant scientists and not enough Nobel Prizes to go around.”

After studying Natural Sciences at the University of Cambridge, Greg completed a PhD at the LMB, working on the amino acid sequence of tryptophanyl tRNA synthetase from the bacterium Bacillus stearothemophilus. Greg continued to specialise in protein and nucleic acid sequencing through post-doctoral research in the LMB’s PNAC Division and became a Group Leader in 1981.

In the 1980s, Greg became interested in the idea that all antibodies have the same basic structure, with only small changes making them specific for one target. Previously, Georges Köhler and César Milstein had won the Nobel Prize for their work at the LMB in discovering a method to isolate and reproduce individual, or monoclonal, antibodies from among the multitude of different antibody proteins that the immune system makes to seek and destroy foreign invaders attacking the body. However, these monoclonal antibodies had limited application in human medicine, because mouse monoclonal antibodies are rapidly inactivated by the human immune response, which prevents them from providing long-term benefits.

Greg Winter then pioneered a technique to “humanise” mouse monoclonal antibodies; a technique that was used in the development of Campath-1H by the LMB and University of Cambridge scientists. This antibody now looks promising for the treatment of multiple sclerosis. Humanised monoclonal antibodies form the majority of antibody-based drugs on the market today and include several blockbuster antibodies, such as Keytruda, which was developed by LifeArc, the MRC’s technology transfer organisation, and works with your immune system to help fight certain cancers.

Greg then went on to develop methods for making fully human antibodies. This technique was used in the development of Humira (also known as adalimumab) by Cambridge Antibody Technology, an MRC spin-out company founded by Greg. Humira, the first fully human monoclonal antibody drug, was launched in 2003 as a treatment for rheumatoid arthritis. Today, monoclonal antibodies account for a third of all new treatments. These include therapeutic products for breast cancer, leukaemia, asthma, psoriasis and transplant rejection, and dozens more that are in late-stage clinical trials.

Philipp Holliger, Group Leader in the LMB’s PNAC Division, congratulated Greg, his former PhD and post-doc supervisor: “This is a fantastic recognition not just of Greg’s fundamental contributions to developing phage display as the main discovery tool for antibodies, but of a whole body of work. The impact of his ground-breaking work is already profound and will no doubt increase with time.”

Greg has been presented with many awards for his work, including the 2013 Gairdner Foundation International Award, the MRC’s 2013 Millennium Medal, and the Cancer Research Institute’s William B. Coley Award in 1999. He is a Fellow of the Royal Society and of the Academy of Medical Sciences, was Deputy Director of the LMB from 2006-2011, and acting Director 2007-2008.  He has been Master of Trinity College, Cambridge since 2012, and received a Knighthood for services to Molecular Biology in 2004.

Jan Löwe, LMB Director, commented, “I am most delighted that an LMB scientist has been given the ultimate scientific accolade. It highlights the LMB’s unique culture, but more importantly, rewards one of the most innovative and entrepreneurial scientists of his generation.”

The work of LMB scientists has previously been recognised by the award of 11 Nobel prizes: 8 in the field of chemistry and 3 for physiology or medicine. These prizes celebrate key advances in primary scientific research and for developing pioneering techniques for molecular biology.