ATP – adenosine triphosphate – provides the fuel for life in all organisms from bacteria and fungi to plants and man. It captures the energy in foodstuffs and uses it in building cellular components such as DNA and proteins, in muscle contraction, in transmission of nerve messages and in many other processes.

In the late 1970s, John Walker began his studies of ATP synthase, a molecular machine that is the key enzyme in cellular energy conversion. He realised that a detailed knowledge was required in order to understand how it works. Therefore, he isolated the molecular machine involved in the production of ATP from the mitochondria, the power-houses in our cells. He characterised its many component parts and showed how it is constructed from them. This work led to the realisation that the machine is driven by a mechanical rotary mechanism, a new principle in enzyme function. This discovery opened up new areas of chemical research as well as providing the basis for biomedical applications for the benefit of mankind.

The study of the process of energy conversion in biology continued at the MRC Mitochondrial Biology Unit. Here, John Walker and other researchers focused on understanding the biochemical and biological processes which occur in mitochondria, studying energy conversion in man and its involvement in human conditions such as aging, obesity and neuromuscular and neurodegenerative diseases, with the aim of eventually producing new therapies.

John shared the Nobel Prize with Paul Boyer from the University of California, Los Angeles, and Jens Skou from Aarhus University.

“We’re not asked to find cures for diseases, but to provide the background that allows disease processes to be better understood.”John Walker 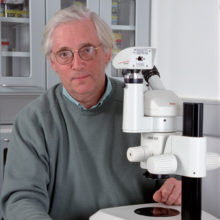