“for their studies of the structures of globular proteins”

The Structure of Proteins

The long chains of amino acids that make up proteins are coiled into specific three-dimensional configurations to give each protein its unique properties. In order to understand their function, it is vital to know their physical structure, as well as their chemical structure.

Inspired to start work on protein structure, Max Perutz, at the MRC Unit for Research on the Molecular Structure of Biological Systems (now the MRC Laboratory of Molecular Biology) chose haemoglobin, the red pigment of blood whose major function is the transport of oxygen from the lungs to the tissues. Consisting of four chains, it is, at the molecular level, a large protein. It took 25 years for its structure to be determined. John Kendrew joined Max at the Unit and started work on a related, but smaller protein, myoglobin. Myoglobin consists of just one chain, and is present in the muscle of mammals such as whales and seals, where it acts as an oxygen store during diving. In 1959 it became the first protein to have its three-dimensional structure determined. The haemoglobin structure followed just a few months later.

Max and John developed the technique of protein crystallography, which uses the way that crystals of proteins cause X-rays to change direction to produce unique patterns from which their structures can be established. This technique is now used worldwide to determine the structure of large molecules. Determining the structure and function of proteins helps us to understand malfunctioning proteins, which cause illnesses, such as sickle cell anaemia, and helps develop treatments for these. The MRC Laboratory of Molecular Biology has major programmes on protein structure, harnessing techniques that rely on complex technologies.

“I think we pushed knowledge of living matter down to the atomic level and this enormously increased our depths of understanding of the nature of life.”Max Perutz 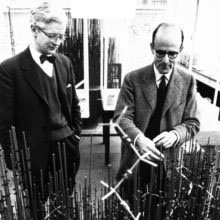