“for his work on the structure of proteins, especially that of insulin”

Every function in a living cell depends on proteins. They are complex organic compounds that play a central role in the structure and functioning of living cells. They include: structural proteins, e.g. in muscle; enzymes which are catalysts for reactions in the body, e.g. in metabolism; and specialist molecules e.g. haemoglobin. Proteins consist of molecules called amino acids linked into long chains.

For the first of his two Nobel Prizes in chemistry, Fred Sanger determined the entire sequence of the 51 amino acids in the protein insulin, and showed how they are linked together. Insulin is an important natural hormone, which controls the level of glucose (sugar) in the blood, and is used in the treatment of diabetes. Fred’s method involved separating the different fragments of the protein on filter paper and moving them with an electric current according to their electric charge. This created a distinct pattern on the paper, which Fred called a ‘fingerprint.’ The information about these fragments then had to be reconstructed – like a puzzle – in the correct order to give the sequence or ‘chemical structure.’

After 12 years of dedicated research, this was the first time the chemical structure of a protein had been deduced. It demonstrated that the sequence of amino acids in protein chains determines the individual and physiological properties of the protein. Fred’s methods could now be applied to proteins in general to explore their role as key substances for life. Today, it is still necessary to use chemical means to determine protein sequences.

“In spite of the many difficulties and set-backs that one encounters I’m sure that scientific research must be one of the most fascinating and exciting occupations.”Fred Sanger 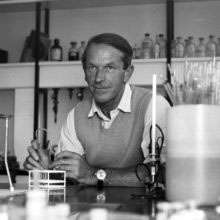