“for studies of the structure and function of the ribosome”

Each cell in every life form contains thousands of ribosomes, which are large molecular machines that make proteins. In one of life’s core processes, the ribosome translates the DNA code into life, producing the tens of thousands of different proteins that in turn carry out a vast number of processes that allow a cell to live. Stretches of DNA carrying the genetic information to make proteins are copied to a temporary molecule called messenger RNA (mRNA). Ribosomes work along mRNA, reading the encoded information needed to produce specific proteins. In order for proteins to be generated at the speed and quantity required, a number of ribosomes work simultaneously along each mRNA strand. An understanding of how ribosomes work is crucial for a scientific understanding of life.

This information is critical in developing new antibiotics to combat infection and disease. Many such antibiotics work by using the small differences in their binding pocket between human and bacterial ribosomes. By preferentially binding to bacterial ribosomes, they prevent bacteria from making proteins, so that they cannot survive.

The knowledge about ribosomes opens up the possibilities of more medical advances and applications in the future. Venki’s group continue their studies on ribosomes, at the LMB, to further understand the detailed mechanisms involved in the process of protein synthesis and how it is regulated by the cell. They also want to understand how the process is altered during cancer or viral infections.

Venki shared the Nobel Prize with Thomas Steitz from Yale University and Ada Yonath from the Weizman Institute.

“Supporting long-term basic research like that at LMB does lead to breakthroughs. The ribosome is already starting to show its medical importance.”Venki Ramakrishnan 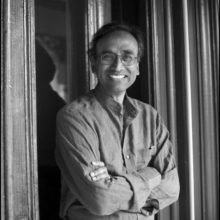